After a long and tiring week of adventure we can finally declare that Happy Acres has taken the next big step towards becoming a reality and has at last been cleared of its forest of trees. This is especially big news for Happy and his Grandpa (who broke 2 ribs after taking a fall on the land), because it will make it much easier for them to walk on their dream lot and much easier to dream of the day when Happy Acres at last becomes a reality. 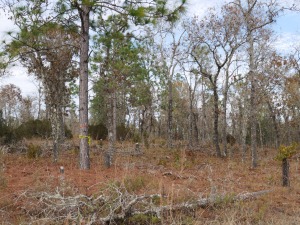 Vising our land was the highlight of Happy’s month, but months of seeing nothing but even he was growing tired of looking at rows of tall trees that prevented his dream land from becoming his dream home.

It was a hard week on all as we had to travel over a hundred and fifty mile round trip. But it was worthwhile to watch those skinny little trees fall to the ground and then be dragged into piles before they went up in a blaze of ground improving glory. All of our faces were lined with wide smiles as we watched the first tree come crashing to the ground. Even Happy managed to smile from his hiding spot underneath his pillow.

Actually he was a rather brave pup. I was certain that the cacophony of strange noise and the vibration caused by the falling trees would cause him some fear. And indeed the first thing he did was hide in between our seats and when his car pillow was placed over him he made no attempt to extricate himself out from under, but instead seemed to garner some relief from its slim cover. Yet in spite of this he was far calmer than I had expected, having shown far more agitation and fear over a thunder storm.  Through the whole ordeal he never once barked unlike the loud display caused by the sound of the weather alarm going off. It was as if Happy somehow realized that all the commotion was necessary to make his dream of living on the land with his chicken friends a reality.

By the first afternoon our land looked far different from the rows of scrawny trees that had graced it in the morning. Now there were large patches of clear land waiting to for us to explore. The change was so dramatic that when I turned to Happy who was sitting next to me on his Auntie’s lap and asked him how he liked his land, a startled look instantly came over his little face. With the familiar twist of a questioning dog he looked at the now clean piece of land before him, then he turned his head towards the other side of the road and looked at the piece of land that was covered in trees, and back to his lot again with a puzzled look as if he were saying to himself,

I wish that I had gotten a picture of the quizzical look on Happy’s face after I pointed to a section of clear land and asked him how he liked his land.

The confused look on his face as he tried to figure out the where, what, how, and why of this strange looking thing I called his land was priceless. After a few seconds of admiring the intelligence that brought about that look I simply said, Happy the trees have been knocked down. And a few moments latter a smile spread over his face. He might not have understood what I meant by the trees had been knocked down, but he was smart enough to understand the good news that his land had been transformed.

After such a hard first day I was not certain that Happy would want to make another trip, but he was the first one at the door. And to our delight day 2 was much easier as he gained the courage to spend some time sitting on our laps watching before taking refuge every so often between the safety of the back two seats, only this time he was confident enough to stay on top of the pillow. His bravery was rewarded by a short walk on the land. His excitement was so great that despite his small size he nearly dragged my sister a couple of times in his enthusiasm at being able to walk, even run where trees and cactus had blocked his way. 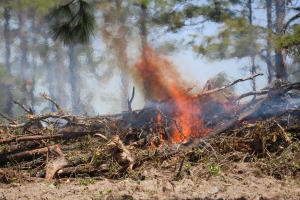 Oddly the sight and smell and of burning wood was not the least bit disturbing to Happy who sat comfortably on his Grandmother’s lap watching the fire.

The time came, much sooner than we imagined, when it was finally time to start burning trees. This brought me anew set of worries as I considered how Happy might react to the fire. If Happy had been afraid of being hurt by a falling tree or being run over by that massive yellow machine that combed his land, what kind of fear would the smell of burning wood only a few feet away?

Strangely enough my fears proved to be groundless. It was as if he had swallowed a courage pill during the night. No longer did he need to hide between the seats, but was able to bravely sit on our laps and dreamily stare out the window or an open vehicle door. His courage was so strong that he happily went for a walk on the edges of his land while a pile of trees burned only 200 feet away.

Finally after five long days, the dream of more than a year came into focus, as with great joy we all took our first lingering look at our newly cleared land. There is still a great deal of work to do to turn Happy acres into our little dream home in the country. Sadly Happy will have to wait a little longer before he enjoys the privilege of bringing home his first set of feathered friends, but for now we enjoying this moment of celebration as Happy Acres moves one step closer to becoming a reality.